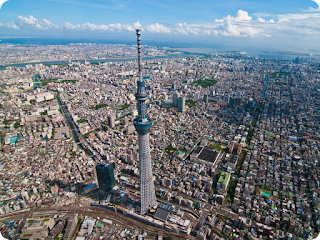 Justen's school is in the shadow of the Sky Tree, so he paid a visit there after class one day and took a bunch of pictures. Move over Tokyo Tower, you have a much taller brother! Take a look at the details of the newly-finished tower on Wikipedia here.
We're looking forward to a visit to the Sky Tree as a family sometime. Unfortunately, it may be a while. At least a million other Tokyo visitors have booked ahead of us. There are no special exemptions for big-nosed foreigners, either. I checked. Whether or not the missionary calling is a high one, we are low ones for now.