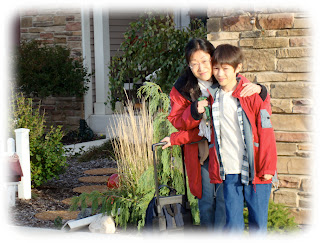 We've arrived back in Indiana safe and sound for a couple weeks of needed break from ministry in Japan. Kaori was able to get a stamp in her visa that maintains her permanent residence in the States. We also learned that missionaries may be exempt from needing to return every two years to make this happen. Hmmm. We'll have to research that one a little more. No matter, we are grateful for the time to be in the States together with family and supporters, and all things very familiar, yet strangely different.

It is that last point that bears emphasizing. After two years away from the States, we expect things to be different upon our return. But along with that feeling is a general sense of disconnect with things that is hard to pinpoint exactly. There is the sense of being a foreigner to your own culture that always manages to sneak up and surprise me when we return home after a period of time like this. Slight reverse culture shock is part of that, but there is more. Slowly my point of reference and identification has drifted away from the North American axis, to points east...far east. It's only upon coming back and scraping against my own home culture again that I come to realize how lengths of time in Japan have changed me. 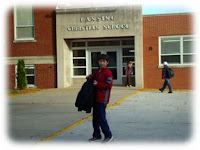 Well, enough with the introspection for now. There are many things to do during our three week stay. Justen is going back to Lansing Christian for a week to reconnect with his school pals. Kaori and I are speaking in four different churches, and connecting with many more people. Phone calls and personal matters. Shopping and family. It all takes a bit of time. But we relish this great fall weather to experience it all in. More later.
No comments: 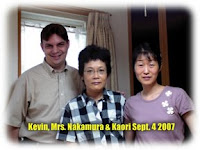 “Humanly speaking, it [missions in Japan] is impossible. But not with God. Everything is possible with God!” Mark 10:27 NLT
No comments:

How Not to Iron Your Clothes 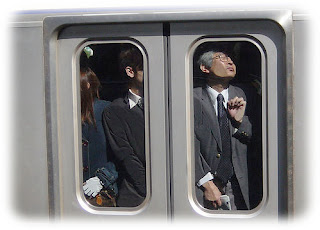 No, this is not a new way to press your clothes, it is a daily reality for those who commute into Tokyo from our neighborhood station.

We're sometimes asked by you, "Are the Tokyo trains as bad as we hear?" If you have a Japanese definition of personal space, then no they are not so bad. But for most Americans who are used to a wider circle of empty space about them, it is pretty hard to adjust to this part of the Japanese culture. What you do not see in the photo is what no doubt happened about 10 seconds prior to this: the white-gloved station platform attendant literally pushing, squeezing, and otherwise using force to get this man, and others into the train car.

Our train line (and neighborhood in general) is changing. They are lying new track to expand the capacity from 2 tracks to 4 tracks. In the process a lot of housing and businesses along the existing line have needed to be demolished. It looks like a war zone in our neighborhood on most days. But when it is finished it is supposed to alleviate some transit capacity problems like this. They promise that trains will only need to be packed to 150% capacity. Yikes!
1 comment: