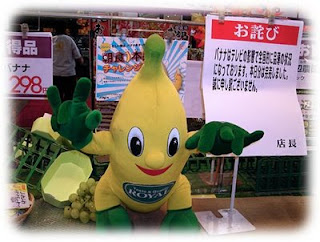 This isn't the first diet to sweep the nation. There was the tofu diet and the fermented bean curd diet crazes not too long ago. I didn't mind the grocery store being low on those. I suppose in time this diet will also go the way of all flesh, but in the meantime if you want a banana you've got to stand in line.
No comments: 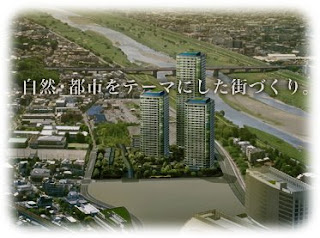 We're getting some new neighbors. About 7,500 of them to be more specific. We continue to marvel at the new city-in-a-city called "Rise" being built just a few minutes from us. Its three towers rise some 30 and 40 stories above the rest of the neighborhood. It's slated to be completed by April.

This is just another in the trend of major construction projects around us. Just last year "Eden" opened. It's massive towers of concrete and steel hardly do justice to its name. More than 8,000 people live in that tiny footprint of land. And more such construction projects are in the works in our immediate area. Our easy access to points in Tokyo makes the Denentoshi rail line a desirable place to find housing for commuters. But we wonder if this massive urbanization is really sustainable. Talk about population density!

On the other hand, 7,500 new neighbors means 7,500 new evangelistic opportunities. Thank you, Lord, for bringing those opportunities our way!
No comments: