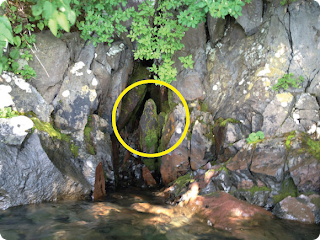 Many people in northern Aomori, Japan have discovered that Jesus really is a rock (not the Rock, unfortunately).

It seems that a recently discovered rock formation in a hidden alcove along Lake Towada roughly resembles the silhouette of Jesus. Hundreds of tourists are boarding boats to take a closer look. A YouTube video describes the scene.

The name of the lake begins with a Japanese letter that looks like a cross (十和田湖). That coincidental spelling bolsters the idea in the mind of some tourists that this rock is indeed religiously significant. Some have even suggested that this may have been a site of worship for Japan's hidden Christians during the brutal 16th century persecution.