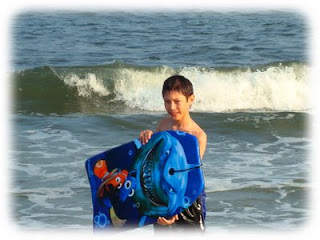 Sounds like a movie title or a waterpark ride, but it is just the three Lavermans in the Atlantic ocean near Ocean City, NJ. We've swam in the Pacific (hard not to if you live on an island in the middle of that ocean like ourselves), but the Atlantic was a first experience for all of us. Impressions: saltier than expected, big and powerful wave action, clean beach but foot-scalding hot sand, many too many clams. And, wow, have I mentioned those powerful waves.

In some ways we were foreigners to a new land, definitely out of place with our lawn chairs and "beach umbrella" (a large doorman's umbrella), and pretty clueless in a lot of other ways. We saw no point to investing in those things for a single visit to the beach. We did, however, get a boogie board for Justen (Hey, it was his 12th birthday!) Kevin managed to monopolize the time on it. 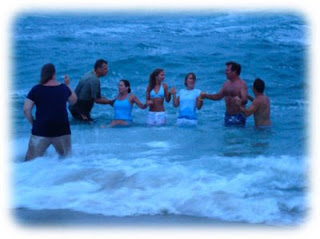 Another use for the beach, we discovered, was as a great big baptismal for new Christians. One of the churches we visited on a Wednesday night along the shore line, baptized a couple families in the ocean! An approaching storm made for some cold temperatures and big waves. Planting a Baptist church in Japan, we've had our own unique baptism sites, but ironically the ocean is one place we have yet to visit. A new one for my idea list.
No comments:

I had heard about these. The famous square melons of Japan. But I laughed off the idea as nothing more than a funny rumor. Until I saw them myself, that is. Yes, Virginia, there is a square melon! And they are very expensive (around $100 each). Japanese farmers form these by placing them in glass cases while the melon is still young on the vine. Click the picture for a bigger view.

But other than being an interesting piece of cultural trivia, of what practical use is this square melon? As it turns out, it is a perfect solution for the space-conscious urban Japanese. A round melon requires a lot of room in one's refrigerator. But these square melons are grown to the exact size of typical shelving in a Japanese refrigerators. Talk about "cornering" the market!

We're reminded in Scripture of something else that grows to the shape of its surroundings unless we're careful: "Do not conform any longer to the pattern of this world, but be transformed by the renewing of your mind." Rom. 12:2 Our minds, like melons, need to break out of the conforming pattern of this world. How? "Whatever is true, whatever is noble, whatever is right, whatever is pure, whatever is lovely, whatever is admirable--if anything is excellent or praiseworthy--think about such things." Phil 4:8. That's how we grow the way we were designed to be! So how's it growing with you?
No comments: 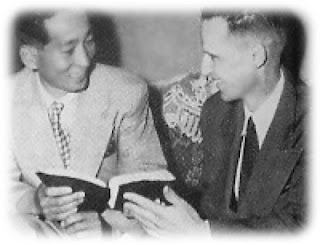 Fuchida died 25 years ago, on May 30, 1976. Like dynamite inventor Alfred Nobel, who wished his legacy to be one of peace rather than destruction, Fuchida wanted the message of his changed heart to supersede the memory of his infamous attack. He wrote, "That morning [December 7] … I lifted the curtain of warfare by dispatching that cursed order, and I put my whole effort into the war that followed. … [But] after buying and reading the Bible, my mind was strongly impressed and captivated. I think I can say today without hesitation that God's grace has been set upon me."
No comments:

Niagara Falls, or does it? 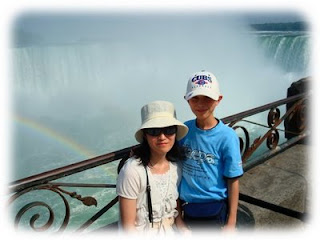 The "road trip" is perhaps the way of life for a missionary on furlough. To keep the driving from driving one crazy, it helps to have a few things to look forward to along the way. Know of a great place to stop enroute from Chicago to New York? How about Niagara Falls!

On our way to a month of visiting with supporting churches on the east coast, we took a little time out to see one of Canada's natural wonders. The last time we visited Niagara Falls, Kaori and I were on our honeymoon and Justen was only a distant thought. The incredible combination of beauty and power still amazes me. We were glad we took the detour to visit. The mist from the falls was a great way to cool down after a hot drive!
No comments: