I have great news to share with you. I (Kevin) received notice that I am the recipient of a generous scholarship award. I have been wanting to finish the MDiv program at Trinity Evangelical Divinity School, but challenged by the financial end of paying for the tuition costs on a missionary salary. This is of great encouragement and enablement to us in finishing the last part of the program. We are very grateful for the foundation's generosity to us. Thank you, Jesus! Thank you, Harvester's Scholarship Foundation!

Harvester's Scholarship Foundation is a non-profit organization that is particularly interested in assisting missionaries with their ongoing training and education. If you are interested in examining the qualifications for yourself or a possible candidate you know of, or contributing to the foundation, more information is available at www.harvestersscholarship.com
No comments: 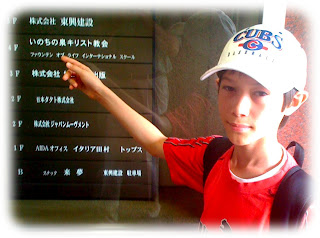 There's nothing quite as intimidating as the first day at a new school when you're 12 years old. What a week of adjusting it's been for Justen.

Justen's old church school closed its doors this past summer after 6 years because of personnel and financial struggles. Now Justen is attending "Fountain of Life International School." It is a tiny church-based school (all church-based schools are tiny in Japan) of 10 students ranging from 1st grade to high school. Each student receives a lot of individual attention, tutoring and help. Subjects are taught in English as well as Japanese. And that is "cool" with our bilingual Justen.

The new school is actually a bit closer than the last one, but still requires 3 trains to get to. This time he heads into (instead of away from) Tokyo on the train at the height of the morning rush hour. Or should we say "crush hour." It's a good thing he's still small because It is indeed a very tight squeeze for a good part of the way. Sometime next year a new train line to open near our home should help alleviate part of that congestion, for a while at least.

You can write Justen a note of encouragement at justenmama@mac.com. Thanks for praying for his quick adjustment to his new surroundings.
No comments: 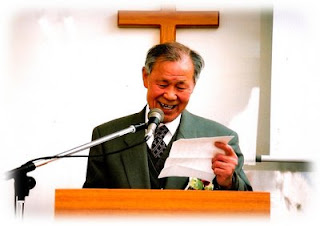 In his baptism testimony three years ago Kenzo wrote: "Many things have happened in the 85 years I've lived, but nothing compares to the great joy of knowing Jesus and walking with him everyday."
No comments: