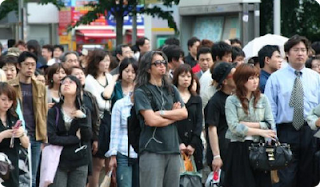 As missionaries, we try to keep tabs on social trends. This one is particularly saddening to us. We are reminded of it every time a Tokyo train we're aboard abruptly stops with the chilling announcement of a "jishin jiko" (someone has jumped). Why are so many Japanese contemplating this tragic decision to end their lives?

Many reasons are pointed out: the current economic malaise, the breakdown of the family, the pressure-cooker education system, the high amount of undiagnosed mental illness, the bankruptcy and debt problems, the bullying problem in schools, the Asian collectivism and peer pressure, the 311 disasters...

I think, however, that these factors could be overcome if it were not for lack of one thing, no, two things: caring relationships and knowledge of a caring God. Yes, for all their affluence, Japanese find themselves with this stark lack. Counseling is not provided; Christ is not known.

Mother Teresa put it well: “The greatest disease...is being unwanted, unloved, and uncared for. There's a hunger for love, as there is a hunger for God.” The Japanese claim a belief in 8 million gods, but not one of them offers a personal relationship, not one is close and real to them, not one has loved them with a cross.

Prime Minister Kan vowed efforts to curb suicides, saying, "What we need is a society in which nobody feels abandoned." With all respect to the prime minister, what Japan truly needs is a knowledge of a personal God that never abandons his children, and a church that loves them as Christ. This is our mission. No, God's mission with us and you!

Well put! I have a friend in Japan who almost became a statistic like this. But, God put our paths together and I've seen how He has led her out of her darkness into hope. May more and more people in Japan find true love through Jesus!