A Creamy Drink We Enjoy 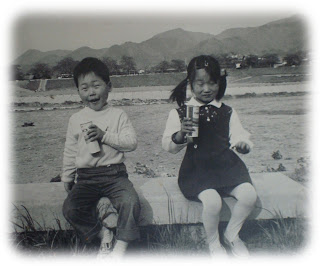 I like this picture of Kaori, age 6. There she is sitting along the riverbank in Yamagata, sipping her Calpis (an uncarbonated dairy-based soft drink in Japan around long before Pepsi) with her brother, Ryuji. Never crossed her mind at the time that some 15 years later a foreigner would come along and -- for better or worse -- the adventure as a missionary wife would begin. Thankfully it turned out to be a foreigner who enjoys a cool Calpis with her now and then. We don't do much sitting along the riverbank these days, but at least the world is in color.