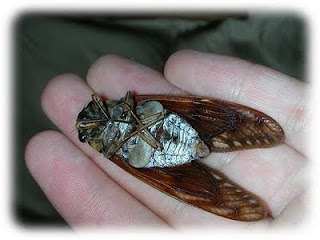 Meanwhile the beetles continue to sing, the Japanese beetles (cicadas), that is. The hot steamy weather this time of year seems to be a source of nonstop celebration for them. They provide the background music everywhere you go, every hour of the day (and night). In a week or two they will begin dying, but for now the literally millions of them in our neighborhood make quite a sound! Walking outdoors at night, I've had many fly into me. This is always startles me a bit as they are large bugs and make a pretty big impact. Take a look at the video here to get an idea of what they sound like together.