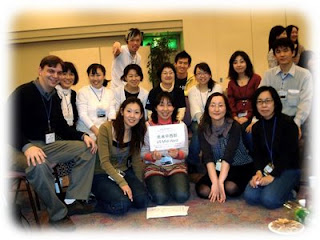 Question: What do all these people in the photo at right have in common? Answer: They've all lived somewhere in the midwest US during their lifetime.

You might have guessed that about the guy at the far left in the photo (yours truly). But the rest of this bunch? Yes, this is a group of midwest "Returnees." Every year thousands of Japanese travel overseas to live as students, businessmen, and educators. Separated from the entanglements of their home culture, many Japanese become Christians while overseas. And every year, after 1 year or many years abroad, thousands of Japanese return back to their homeland as changed people.

The fact is that MANY MORE Japanese become believers while outside their country, than those who remain in Japan! Nearly 80% of all Japanese who become Christians, became Christians while they were overseas. The difficulty becomes connecting these new believers to a church where they can continue to grow when they eventually return home. Often, Japanese "Returnees" find that they cannot really relate well to a traditional Japanese church. They are not understood, and not accepted. Often shortly after returning they uproot their faith from a local church altogether and blend back into society. 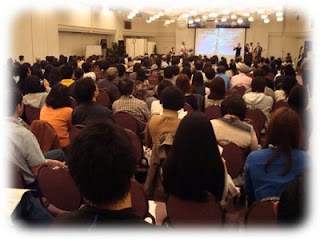 This is a great spiritual tragedy in the evangelization of Japan! If all these new believers were to remain in the church and grow strong in their faith, the Japanese church would be many times it's paltry 1% of the population size.

This past week I attended a conference here in Saitama, Japan that focused on the Returnee challenge. Naturally it was attended by returnees of all ages, including many young returnees, new believers and just back in their homeland. "All Nations Returnee Conference" had some 500 returnees in attendance for three days of sharing, worship, message, and strategy. I was blessed and encouraged, and renewed in my effort and desire to reach out to this unique demographic in Japan.

We want to be a receiving church for Returnees. Our church has at its core Returnees: probably 70% of the church has the experience of living from one to ten years overseas. Would you pray that we would continue to bring in and care for returnees, regardless of whether they have yet made a decision yet for Christ, so that a great harvest of souls result, and the church in Japan would grow strong?