Christmas is all about KFC 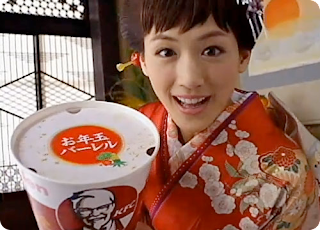 The roots of this craze go back four decades. On a Christmas day in the early 1970's, foreigners in Japan flooded the newly-opened KFCs, gobbling up the colonel's best recipe. It was a poor substitute for the visions of golden-brown turkeys that danced in their heads, but it was the only crispy bird to be had around. A shrewd KFC manager watching the foreigner stampede saw yen signs. In 1974, the company presented its first Christmas meal: chicken and wine for $10. It sold well in spite of being costly for its time.

Today, a family bucket will set you back $40. Still, the Christmas fried chicken fad has taken root in a big way in Japan. A quarter million buckets (or boxes) of chicken will be sold on Christmas day alone. A savvy marketing blitz helps. Weeks ahead of time, a flurry of coupons fill mailboxes of urban homes. TV ads feature Japanese children in Santa hats (and with KFC barrels in hand) dancing about to catchy jingles. Even the revered statue of the colonel in front of KFC stores gets dressed up in a Santa suit (somehow it fits his mystique). Stores take orders four weeks in advance. Long lines form early on Christmas eve to pick up the crispy parcels. KFC has become the go-to meal at Christmastime. 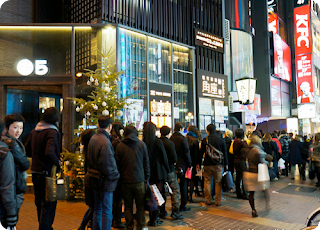 Colonel Sanders would roll over in his grave if he knew that KFC has become the focus of Christmas in Japan. You see, he became a born-again Christian late in life. He knew the focus of the celebration was Christ. We do, too. Right?

I've missed a few Christmases in America. Christmas 2013 is our first in 10 years. And I've come to a conclusion after spending Christmas in Japan for awhile and now being home on furlough. I don't know whether it's really true that "Nobody does chicken like KFC." But it's definitely true that "Nobody does Christmas like America." The music and concerts, the lights and decorations, the get-togethers and endless food, the TV specials and store sales...the celebration runs the gamut from dreamy and reflective, to bustling and hectic, to grand and breathtaking. We know how to do Christmas! But we also know how to lose our focus in the whole celebration.

It turns out that Christmas really is all about KFC. That is, Keeping the Focus on Christ. Time with family and friends, twinkling decorations, tasty food, thoughtful gifts are all wonderful trimmings. But we lose out on the main course if we miss worshipping the One whose birthday celebration it really is. 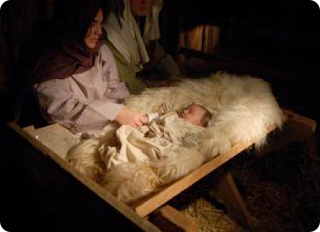 When it comes to Christmas, it might be too much to ask that America would simply scale it back, tone it down, or turn some of it off. Simpler celebration doesn't seem to fit our bigger and better sensibilities. But at the very least we can individually take time to simply worship him. 1 Peter 3:15 says, "But in your hearts sanctify him as Lord." In the middle of it all, choose things that will draw you into worship of Him. And choose to see the rest in a new worshipful way. Choose to let the light displays remind you of the Light of the World who came and "gives light to every man" (Jn 1:9). Choose to let the table spread with food remind you of the Bread of Life who came and "gives life to the world" (Jn 6:33). And, of course, choose to let the presents (however quirky they may be) remind you of the "indescribable gift" (2 Co 9:15) who came to give forgiveness and cleansing, adoption into God's family, a place in eternity, and he himself to us.

Let the things of Christmas amplify and not distract your worship of Him. KFC. Keep the Focus on Christ. And that's what will really make Christmas "so good!" (KFC pun intended)