How Do You See the World? "That's not how the world is supposed to look at all!"

That's what I nearly shouted when I first saw that image on TV many years ago. The popular Japanese cartoon's intro theme had panned out from a Tokyo house, to gradually show the surrounding city, area, country, and then the entire globe...with Japan squarely at the center! My home continent was nowhere in sight.

Doesn't every cartographer know that North America should be around the center? Maps just look balanced that way! Google "world map" images and you'll see that the USA is always center left, while Japan is at the far periphery. But wait! Google "world map" in Japanese (世界図) and a whole new set of "strange" images comes up. Japan is at the center. All continents are at the periphery.

East or West, it seems that wherever you call home, that becomes center of all things for you. The Chinese name for their country literally means "middle kingdom." This name emerged from Chinese philosophy that believed China to be in the center of the earth. Not to be outdone, the Japanese name for their country literally means "origin of the sun." In 607, Prince Shotoko of Japan began a letter to China with the less than politically-correct greeting: "From the sovereign of the land of the rising sun to the sovereign of the land of the setting sun." Diplomatic relations may have yet to recover.

Let's face it. This me-at-the-center-of-things thinking has permeated human history since Adam and Eve. And it's made a real mess the world over. Some call it ethnocentrism. Others call it national or ethnic pride. Still others call it geo-politics or socio-economics. But when this thinking takes over, the Bible calls it sin. Because such thinking takes glory away from the True Center.

"Words like Jewish and non-Jewish, religious and irreligious, insider and outsider, uncivilized and uncouth, slave and free, mean nothing. From now on everyone is defined by Christ, everyone is included in Christ." Eph 3:11 MSG

God does not divide up the world along geographic, cultural, socio-economic, or racial lines. He sees people only in relation to himself and his Son, Jesus. His children are either found or still lost. They are a part of his Son's kingdom or still outside of it. It's that simple.

Looking at the world with God's eyes will drive mission work. When we humbly realize that none of us was or is at the true center, our task becomes clear. We must reach out to people on the spiritual periphery, wherever they are found, and point them toward the true center, Christ.

So how do you see the world?
No comments:

Seasons of a Church Planter

The cherry blossoms are long gone. Scorching temperatures came in May. And now June begins the rainy season in Japan. Rain poncho and umbrella sales are booming. Seasons change. Even in the life of a church planter.
Although there's still much finishing work to do at Denen Grace Chapel, we've started to look toward to our next church planting work in the area. It won't be easy. But we're praying as a couple. We're communicating vision to Denen church members. We're trusting our Season Changer's guidance and provision. Would you pray with us, too, for the changes ahead?Even as seasons change for us in church work, sometimes we get a slice of several "seasons of church planting" at once (that happens in weather, too). Here's a snapshot of four seasons in the last few months. 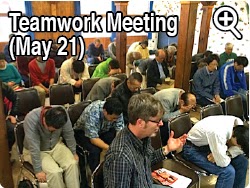 I was challenged anew by our early morning prayer time together. We prayed for Japan. I sat between a pastor weeping and another prostrate on the floor. For hundreds of years, in spite of the sweat of many workers and the blood of many marytrs, the Japanese have only responded in small numbers to the gospel. But we pray and wait. God is working under the surface. 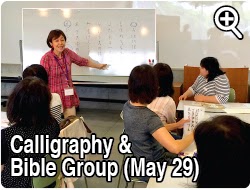 The gospel plant grows best in native soil. So, over the years we've tried to incorporate Japanese culture into our church activities (while being careful to not compromise the gospel message). In this photo, our group of ladies are practicing the art of Japanese writing using Scripture verses. (see photos)

For many in this group, it's their first interaction with the Bible! Toward the end of class, our church member (standing in photo) shared a familiar Japanese rhyme used in writing exercises. Few Japanese know that it was created by the underground church (see website) during the martyrdom of the 17th century. The last letters of each line form the hidden acrostic: "Jesus died for me." That discovery brought some startled response from the ladies! Keep praying! 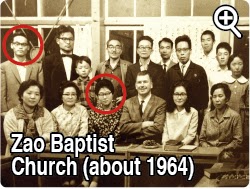 Recently while preaching at my wife's home church in Yamagata, I was struck by this photo on display there. It shows a tiny group of early church members (including my circled in-laws) surrounding the planting missionary, Joe Meeko. Fifty years later this church has multiplied many times over. It's won to Christ, discipled and sent out many, some even to foreign mission fields! And my life story intersects here, too. Without that missionary's evangelistic work, I might not be married to a Chrisitian woman named Kaori!

Mr. Meeko's faith and dedication was huge, but ultimately it was the work of God that brought my Yamagata family to Christ. I pray Denen Grace Chapel will be the same kind of dynamic, multiplying church here in Kawasaki in the years to come. If God chooses bring much fruit from this work, it won't be because of my ability. Make no mistake: "God gives the growth." (1 Cor 3:6) 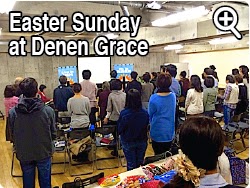 Recently on Easter Sunday 2014, I did again what I sometimes do in church. I got out of my front seat and stood in the back. The view from the back is special. Seeing new Christians standing together and worshipping God draws me into deeper worship and thanks, too.

When the week of church planting has been hard, when setbacks seem to outnumber forward motion, when the cultural stress builds up, I like to remind myself of why I'm here. So I go to the back on a Sunday and take a good look.  And God tells me, "Always give yourself fully to the work of the Lord [Kevin], because you know that your labor is not in vain." (1 Cor 15:58)