A Trip to the "Tree of Hope" 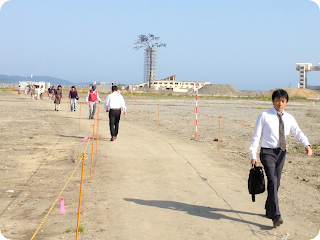 I’m a little disappointed with hope. The tree, that is.

I’ve written before about the “Tree of Hope” in tsunami-struck Rikuzentaka, Japan. It’s official name is “The Miraculous Solitary Pine Tree.” Out of a glorious forest of some 70,000 Edo-era trees, this one alone survived the waves of 311. It was heralded as a miracle, a source of hope for a devastated country.

But 16 months later, despite the best preservation efforts, its roots finally succumbed to saltwater poisoning. So it was sawed down in sections. The wood was treated, the leaves coated with a synthetic resin, and a metal spine inserted down its trunk. The $1.5 million price tag for all this preservation work garnered a lot of criticism. Many felt the little city’s relief money might be better spent.

A ceremony for the restoration of the tree was held on March 10, 2013, a day before the 2nd anniversary of the 311 triple tragedy. Here, Yoshihisa Suzuki, president of the association for its preservation, said, “It’s returned at last. I’m convinced that the tree will cheer us up.”

A recent trip up in Tohoku took me close enough to Rikuzentakata to visit the memorial. Though I wasn’t quite sure of the location, it turned out to be hard to miss. The glint of the afternoon sun off the metallic skeleton led me to the spot from a distance. I pulled into a stone parking lot on the beach front and walked the kilometer or so to the base of the tree. A half dozen other onlookers stood nearby.

To be honest, I felt it difficult to be “cheered up” by the sight of the tree. The dead, lonely pine posed so artificially. The scaffolding holding it up as though it were a crippled patient in traction. The desolate, brown “moonlike” beach front. It all had the feeling of melancholy to me.
Rather than a place of inspiration, it seemed to be a place of former glory now lost. The scene reminded me of God’s words through Isaiah to Israel: “You will be left like a lonely flagpole on a hill” (30:17). Japan’s situation is no less tragic than Israel’s. 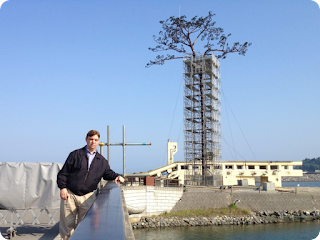 I’m sure many tears were shed at the sight of this tree.

I don’t understand God’s purposes for Japan’s suffering, or any human suffering. But I know where the source of hope is in the middle of suffering. He is there waiting for you, and for Japan, to “come to him so he can show you his love and compassion. For the Lord is a faithful God. Blessed are those who wait for his help” (30:18).

I’m so glad that passage continues with words of hope. May I insert Japan?

O people of [Japan], who live in [Rikuzentakata],
you will weep no more.
He will be gracious if you ask for help.
He will surely respond to the sound of your cries.
Isaiah 30:19

I’m so glad that God’s response to man’s cries, to Japan’s cries, involved the sending of his Son. Here is a hope that “does not disappoint us, because God has poured out his love into our hearts by the Holy Spirit, whom he has given us” (Romans 5:5).

I’m so glad God made a way for Japan to escape bitter weeping and find true comfort.

My “tree of hope” is still the cross of Christ.