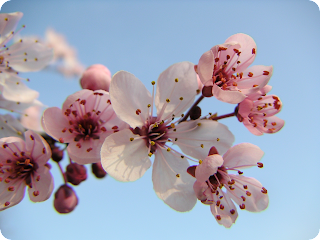 Those were her exact words to me...in English. God, however, had a different, better plan for Mrs. E, a changing of the seasons of her heart.

The first time she ever set foot in a church was her visit with us in the fall of 2011. If she was nervous about things, you wouldn't have known it. During the announcements when I invited her to simply give her name, she held the microphone and boldly stated that she felt pushed by God the right way to attend church. Sure enough, she came back the next Sunday. It happened to be a Sunday when a guest speaker gave a clear evangelistic message. It was too much for her to process all at once. We weren’t pushy, but somehow she felt pushed again, in the wrong way. That’s when she shared with me her honest thoughts above. Then she stopped attending services.

Even so, Kaori and Mrs. E began to exchange email. Mrs E wrote with increasingly openness regarding treatments she was receiving for a serious illness. She asked for prayer. She wanted to purchase a Bible. And we began to pray for her to open her heart to His words of hope in it.

Several months later she was back in church for our afternoon Grace CAFE (English service). I was glad to see her, but knew I had to be gentle in my approach. I carefully tried to ease our conversation back to spiritual things. I nearly fell out of my chair when, in the course of sharing many things, she suddenly volunteered, "...and I now want to be baptized!" What a change!

By this point she had begun to attend a different church that had its own grave for members (an important matter for many Japanese Christians who do not wish their remains to be placed in a Buddhist family grave). She had come to grips with the reality that her illness was terminal. We encouraged her in her decision to be baptized. I gave her a Bible storybook to share with her young son (it was really more for her). She read it to him joyfully. In spite of her sickness, she started to sing gospel music with enthusiasm that outstripped the rest of the choir. The woman who said she would not be a Christian now knew how precious Christ is.

Last month she wrote us to say that she was feeling increasing pain and sometimes it was unbearable. She desperately asked for us to pray for her. We were traveling at the time and could not reply to her email. It doesn’t matter; she knows that now. Because on Palm Sunday Mrs E made her own triumphant entry into eternity. Japan’s cherry blossoms were in full bloom, a week early, that day.

I imagine the angels and saints lined up to received her with shouts of victory. And Jesus himself, her Risen King, and Season Changer, welcomed her home. Mrs. E now knows with perfect completeness how precious she is to Christ. “Precious in the sight of the LORD is the death of his saints” (Psalm 116:15).

Thank you, Father, for changing the seasons of Mrs. E’s heart, to receive your Son, Jesus, in this her life. Please bring her husband, young son, and family to the same joy and hope. AMEN.

Email ThisBlogThis!Share to TwitterShare to FacebookShare to Pinterest
Labels: Heaven