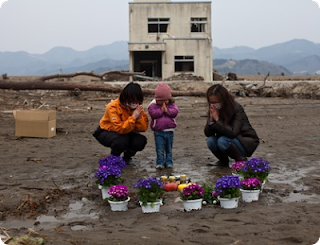 Two years after Japan's darkest day since the end of WWII, the memory of 311's earthquake, tsunami, and nuclear crisis is still the somber backdrop for most conversations. Twenty thousand dead or missing in a moment of time. The disaster was so big it echoed to the edge of space. The loss was so much bigger that it echoes in the human heart in every dream and hope, challenge and concern. And there are many of them. Today new worries abound.

What about the next big quake? Don't tell my mother this, but the respected Tokyo University Earthquake Research Institute reported there's a 70% chance that a 7.0-magnitude or higher quake will strike Japan's capital by 2016. Such an event, the scientists said, could mean a death toll of up to 11,000 people and $1 trillion in damages!

What about the return home? Some 350,000 residents still live in temporary housing units and have been officially told to expect to remain there for at least another 5 years. Off the record, many are told it may be much longer. The rebuilding is painfully slow. One man (in the video here) looking out at the vast wasteland of emptiness that was once his hometown sobs, "We have all these hopes and dreams, but in reality nothing moves." Corruption, bureaucracy, and lack of leadership have slowed the recovery to a crawl. 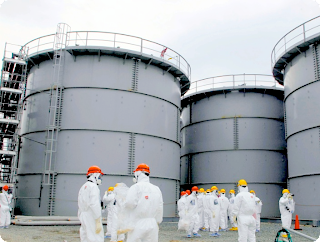 And what about the nuclear resolution in Fukushima? We knew the crops, groundwater, livestock, and dirt were radioactive. But even the surrounding forests are radioactive, according to this article. Entire forests will likely need to be razed and millions of trees burned.

Two years later a tour through the troubled Fukushima nuclear plant revealed row after row after row of enormous storage tanks (photo above), more than 900 constructed to date. And the spent water used to keep the core cool just keeps on coming, 400 tons of radiation-tainted liquid everyday! This video on that scene (Japanese only) has to be seen to grasp the size of the problem.

The worries, water and waste. The pressures and stresses underground in tectonic plates and above ground in lives of people. All these things keep building up. Even two years later. And Japan can only look to one Source, one Hope, for resolution to these things. With problems beyond the scope of man's ability to resolve, Japan must turn to God the Father, their Creator and the Ruler of everything.

And many are doing so in the north. God has allowed this tragedy to result in the softening of many Japanese hearts toward him. Even as the bleak winter desolation of tragedy lies all about them, a new spring of life is seen bursting up from many souls. So Japan! Turn toward your Savior and embrace Him in this moment of grief and despair! May you say, "Though the fig tree may not blossom, Nor fruit be on the vines; Though the labor of the olive may fail, And the fields yield no food; Though the flock may be cut off from the fold, And there be no herd in the stalls -- Yet I will rejoice in the Lord, I will joy in the God of my salvation." (Habakkuk 3:17-18) Pray for Japan.