Man vs. Mountain: The Fuji Climb 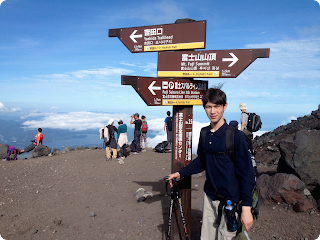 According to an old Japanese saying, "A man is a fool who never climbs Mt. Fuji, and he is a bigger fool for climbing it more than once." So, last week, together with missionary colleague, Greg Swenson and boys, Justen and I set out to undo our foolishness, finally getting around to a Japan "bucket-list" dream. We set out as the "Fuji Five" (a bit of that zest was lost along the way).

The weather was perfect for the climb. We started out at station 5 in early afternoon under clear blue skies and puffy white clouds, making it up to a mountain lodge at station 7 around 6pm or so in time for dinner. The view was breath-taking (and it wasn't just the thin atmosphere). Looking down through some scattered clouds, the entire Fuji five lakes area was visible, and far in the distance a glint of Pacific Ocean. During a curry rice dinner, lightning flashed down below us, though we ourselves were well above whatever was brewing below. Looking at a storm from above is a fascinating angle. 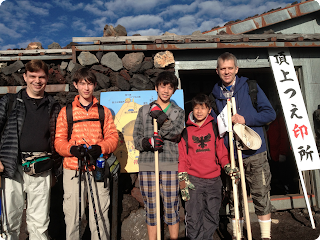 After a few hours of rest, we set out for the summit around 11pm. Our plan was to climb the relentless zig-zag paths upward through the night, definitely a cooler way to go. Oxygen was much thinner and we needed to take frequent breathers. But we were in great company: a couple of hundred more hikers in front and behind us moved slowly and methodically up the rock trails. All the headlamps bobbing along vertically looked for all the world like fireflies in a well-organized flight pattern. Above our heads was the clearest and most populated sky of twinkling stars that I've ever seen. If we knew what to look for, we could easily have spent all night sitting and picking out constellations. The night climb was worth it just for that stunning sight alone! 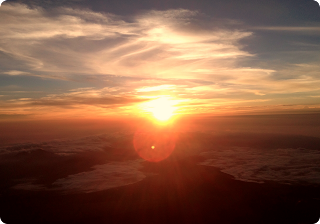 We arrived at the summit around 5am, having hiked for nearly 6 straight hours. We were exhausted, but just in time for Japan's best view of the sunrise. Hundreds of hikers sitting and standing on the mountain summit cheered and clapped as the sun poked above the horizon clouds. The lakes below shimmered and clapped, too. Wow! How I wish the camera lens could have adequately captured the beauty of those few minutes. How I wish I was not so busy taking pictures and could gawk a little more naturally. Amazing! I would not have thought it unusual if, in that glorious moment, Christ were to descend and the rapture occur. At that elevation we had a good headstart on meeting Him in the clouds. 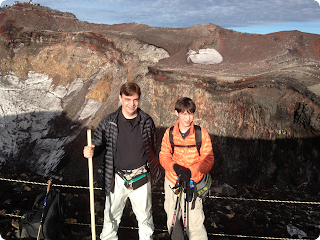 After eating a noodle breakfast at the world's highest ramen restaurant (yep, there's one at 12,388 ft), and sending a postcard from the world's highest post office (one of those, too), we hiked down a little ways to the crater ridge and mused as to whether Fuji might ever be an active volcano again. There are rumors that the 7-magnitude quake predicted for the greater Tokyo in the next 4 years, could trigger an eruption. Another study predicts a massive landslide that would affect 400,000 people.

We headed back down the mountain around 8am, hoping to make it back to station 5 by noon. I'll spare the use of any endurance metaphors here, but suffice it say that "just keep moving" was something we repeated to ourselves silently over and over. It was a hard, steep climb down through what I can only describe as an alien planet-like landscape of red soil and rock. Nothing else of interest (although, I think I might have spotted NASA's Mars Lander). The volcanic soil turned our shoes and trekking poles an odd green. 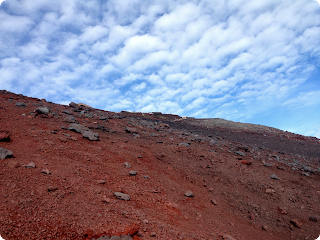 We had missed a night of sleep. And without any visible points of interest, this long trudge down endless, slippery soil trails was especially tiring. For very long stretches, there were no facilities whatsoever. Japan has a million vending machines, but not a single one on the FujiYoshida trail! Not even a spot to shelter yourself well from the sun and elements. It was brutal way to come down from our "mountain high." Mercifully, a light fog followed us intermittently down the mountain and provided some shade from the sun's direct hit. Without that, we would have surely dehydrated (note to self: bring more water on Fuji descent next time).

Fuji is a great non-technical climb/hike that probably most people can do if they are in decent physical shape, take their time, go well prepared, and make up their minds to "just keep moving." True, it is a barren hike for most of the way, but the views of God's creation above and below are once-in-a-lifetime remarkable. Having said that, I think I am satisfied with having elevated my status out of being a fool, and not eager to become a "bigger fool" by doing it more than once. I may just stick to day hikes for awhile. I see some wisdom in that Japanese proverb!