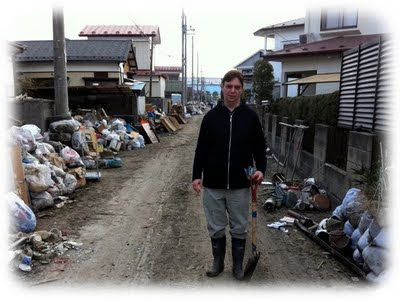 I still haven't returned from tsunami ground zero. That is to say, although I've been back several days already, the reality of the scene is still with me. The incredible amounts of mud in once beautiful homes, the cars tossed around like toys, the shell-shocked people moving about sadly, the piles and piles of everything imaginable from the lives of so many now gone, the smells of kerosene and decay and sewage, the overwhelming feeling of heaviness...it all comes together in Shiogama. The city (along with Kessenuma, Ofunato, Nattori, and many others) along the coast has was hit straight on by the 40ft. tsunami. It's hard to articulate the sheer size and amount of devastation. Riding through town brought scene after shocking scene of devastation. It hurts my missionary heart to see the extent of sadness and lost hope.

Stateside news has moved on to other topics, but the reality of things here in Japan has just begun. This is a disaster of epic proportion. But even in tragedy there is hope.The cross is being proclaimed. Click this video to see the footage from Tsunami Ground Zero that I've put together. (Churches/Mission Committees: Please download here and use for your church's mission education and vision.)

The most valuable thing? 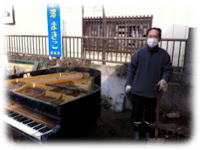 What's taken away. If you knew that in 25 minutes everything around you would be taken away, what would you do or grab? As the tsunami sirens blared away, families in Tohoku fled to safety with little more than the clothes on their back. And then the monster wave came. Those who hesitated lost their lives. Those who fled lost everything else.

Last week I worked in Shiogama alongside a relief team of 5 missionaries. We were overwhelmed by among the piles and piles of people's once-precious possessions, now broken, muddied trash waiting to be taken away. I was reminded again of the fleeting nature of the things of this world. At one home, we carried out a priceless baby grand piano (photo left) to the curb. I felt truly sorry for the piano teacher in the picture who lost his livelihood and his beloved treasure. At another home at which we scraped out mud, the owner was sorting a ruined collection of home videos and cameras. "Toss it all...toss it all." he repeated. In my feeble attempt to comfort him I said, "This is a sad time. But Shiogama will return. It will come back. I'm praying for you!" The man replied slowly, "Shiogama may come back. But I cannot. I've lost everything. I can't live here again." How great is the loss for those for whom the world is all there is! 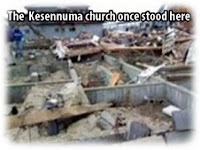 What's left behind. The following is from our church association's pastor in Kesennuma. As much as 80% of Kesennuma, a city of 70,000, was destroyed by the tsunami.

Pastor Minegishi was working in his church office when the earthquake struck at 2:46PM. They have many earthquakes in their area, and actually had had one just a few weeks before. At that time, the tsunami warnings sounded, but there was only a small wave. But on 3/11, the jolt was so strong, Pastor Minegishi sensed this time was different. He had worked at a nuclear power plant before and was trained to check the sea right away whenever a quake occurred. So he jumped in his car and rushed to the sea to check whether it was receding or not. Actually he relates he didn’t see a strong recession, but the warning sirens were sounding, and his instincts told him this was the real thing, so he rushed home, picked up his wife and daughter, and headed for higher ground immediately. The roads were still clear, and they could leave the area without any problem. The tsunami hit 40 minutes later. Many people weren’t sure whether there would be a tsunami or not. When they finally realized one was coming, they all tried to make a getaway in their cars. But by then it was too late – the roads got jammed, and they got stuck in the traffic. The tsunami crushed them in its relentless path.

An older lady in Pastor Minegishi’s church shared this story of what happened to her brother. He picked up his daughter with his car, and they headed for his daughter’s child’s kindergarten. They made the fatal mistake of trying to pick up her child instead of escaping themselves and trusting the kindergarten to watch over the children. The schools in Japan are trained to protect the children in their care at the first sign of danger (although there have been some tragic mishaps also). So her child was already being taken to higher ground while they were headed for the kindergarten. Sadly, they got caught in the traffic jam that trapped many. As danger approached, the father ordered the daughter to get out of the car and seek safety in a nearby 3-story concrete building. She did so, but he was still determined to go to the kindergarten. The daughter relates the last words she heard from her father while talking over their cell phones were: "The water's come!" and then he was cut off. The tsunami slammed into the car and swept it away. She has searched in vain for her father and their car, but has not been able to locate either.

Pastor Minegishi returned to his church and home the next day. To his horror, they were both swept completely away, and nothing is left where they once stood. They had built a new church sanctuary and dedicated it just 3 years ago. But they have lost everything. He loves to read and down through the years had collected thousands of books covering many Christian as well as secular topics. But every single book in his library has been washed away. He felt like he has experienced what Job went through when Job lost everything – his home, possessions, business, and even children. Through this experience, Pastor Minegishi has realized that God’s love is the most valuable thing in life, far above all material possessions. He has renewed his dedication to God and wants more than ever to love Him and live for His purpose. He quotes Song of Solomon 8:7 often, "Many waters cannot quench love; rivers cannot wash it away."

Gotta share Jesus
This past Sunday I shared a simple message on Lamentations in light of recent events. In our sharing time afterward, a woman told me excitedly, "I've gotta share Jesus. I've gotta tell my friends that he's coming again. Things in this world are coming to an end someday." Among the confusion as to God's purposes for this kind of evil tragedy, that kind of passion for evangelism is also bubbling to the surface in Christians. That passion in our hearts is also stronger than ever. This is a historic time of opportunity in Japan for missions. I sense that a wave of spiritual awakening in Japan is coming that will be more powerful than any old tsunami. Have you ever thought about coming and sharing Jesus with Japanese? The harvest is ripe and ready! Would you pray and support us as we reach out to these people that need Him?

How to Pray
1) for pastors up north ministering in tragic circumstances, some approaching burnout
2) for stressed out relief workers working daily without electric and water among great sadness
3) for wisdom to organize and utilize resources effectively in the Christian relief effort going on
4) for opportunities to share Christ, and for the response of many to the gospel message
5) for a quick and safe resolution by the Fukushima Fifty to the nuclear power plant crisis
6) most of all, for Japanese to turn their hearts toward God, place their faith in Jesus, and find rest from their heartache in him

How to Give
Please click here if you feel led to give:
1) Regular or one-time support -- through WorldVenture online. We want and need to stay here, and minister to a heartbroken people
2) Our Evangelism Special Project -- all gifts in April will go toward earthquake restoration work and evangelism efforts
3) Japan Earthquake Relief -- general relief fund to aid our WorldVenture churches in the affected area