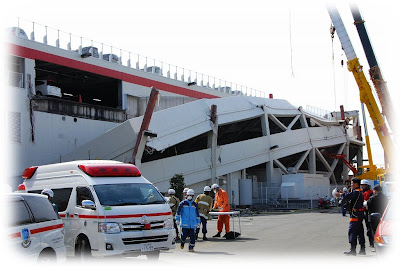 For such a time as this
The events of the past several days, as surreal as they seem, have gradually permeated the atmosphere of everything in Japan. The nonstop tremors, rolling blackouts, emergency alerts and shortages have all created an air of constant emergency that is wearying to body and soul. But we rest in God's goodness and protection. We know that God has a purpose for the events and for us.

Some of you have expressed concern for our safety and asked if we are leaving Japan, particularly with the current nuclear crisis. Thank you for this concern. We are quite safe, and feel secure in God's will to stay put and minister as He allows. There will be much work to do in the coming weeks, months and years, even after the immediate crisis has settled. Troubled times are certainly opportunities to speak into the hearts of Japanese that have been tightly closed. "And who knows (Kevin) but that you have come (to Japan)...for such a time as this?" Esther 4:14

Close Call
One of our church members was shopping with a non-Christian friend at the warehouse club, Costco, here in Machida, Tokyo immediately before the quake struck. She was leaving the building and headed up to the parking, but her friend decided she needed a free refill on her drink for the ride home. Moments later the quake hit. The ramps of the parking garage pancaked on top of each other, trapping cars underneath (photo above at right). This is one of the few structures in Tokyo that received enough damage to make the news. Both were likely spared by the "need" for a refill (the hand of God). he non-Christian friend was pretty frazzled. She has been to our church. She told me in December when I gave an invitation to receive Christ's forgiveness at our Christmas service that she "wanted to put her hand up too." Pray that this close call would urge her to that spiritual decision.

Enough
Some of you have asked what we need. For now, we have enough. We are well supplied! Different areas are struggling with shortages, particularly in the hard-hit Sendai area. Gasoline has been a problem for many. Most stations are closed or have long lines and very tight rations. I had filled up the car several days ago. I grumbled about the gas prices that have steadily crept up above $7/gallon. But now I am thankful to have paid that! Stores have also been selling out of many food items, but we have enough and expect supplies to be restored soon. The rolling power outages throughout Tokyo have not yet affected us. We have running water and gas. The weather is fairly warm. We have all this...and Jesus too!

"We survived the quake & tsunami, but..."
"...but we may not survive the cold and lack of medical care." In stark contrast, there are very serious shortages mounting north of us. Medicine, heating oil, gasoline, food and drinking water, emergency radios, baby items, underclothing, even toilet paper are all in short supply. My personal frustration is to see the desperation of the survivors, and be able to do so little from here.

Tranport service is stopped. Roads are cut off. Nothing gets through. My heartfelt instinct is to grab a shovel and supplies and head north. But I'd soon be a liability myself. There will be time for this type of response with organized teams when the situation stabilizes. The needs in the area will continue for some months (and years) to come.

On top of the disaster and growing humanitarian problems in the north, it is now snowing there and temperatures are below freezing. The gasoline shortage has hampered early relief work. BUT, help is slowly getting into the affected areas. AND a relief effort is being organized by mission organizations here, with the support of many Christian organizations in the States. We expect to be able to tell you more about this in the days ahead. Take a look at one of the planning meetings at left in our mission building here.

PRAY!
We know you are praying. Please don't let up! Double up your prayer time...

...for the rescue efforts going on in the hardest hit areas
...for a quick resolution to the growing crisis in three of the nuclear reactors up north
...for shortages, particularly in the north, to be filled
...for many people in the area that have not yet been heard from by friends of ours
...for Japanese to turn their hearts toward Him

We pray especially that many Japanese would turn to Christ through this crisis. God has purposes.