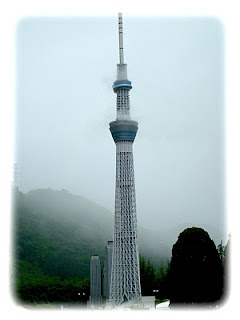 The flipside to this dramatic DOWN is the up, Up, UP of the Sky Tree. This will be a radio tower and observatory some 2080feet tall upon completion sometime in 2012. We recently saw a scale model. Even at 1/25th of the actual size, it soared above us. For comparison's sake, you can see it next to the Empire State Building in the photo above. My list of places not to be in an earthquake keeps growing.