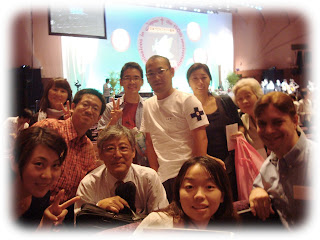 This is cause for celebration! 150 years after isolationist Japan opens the port of Yokohama to the world and Protestant missionaries begin evangelism activities for the first time in Japan, Yokohama throws a massive celebration...for the opening of the port. Meanwhile in a footnote event known only to the Christians, the church celebrates 150 years of Protestant missions in Japan at a portside hall. This latter event is the one myself and several members of our church (photo above) chose to attend and be encouraged by.

Altogether around 14,000 believers attended the Protestant Missions 150th events and memorial over the two-day celebration in Yokohama. I wish the first missionaries could have seen the fruit of their work many years later! B&W photos of the 50th anniversary event show mostly foreigners and some Japanese believers gathered at a YMCA. Photos of the 100th anniversary event show a massive group of new post-war Japanese believers gathered in local stadium. And now the 150th events show even more growth.

Still, the fruit is hard to come by in Japan. Japanese pastors speaking at the event unanimously expressed disappointment that 150 years later, still less than 1% of Japanese are believers. They had hoped Japan would have been more responsive given so much time. One pastor mounted the platform and jokingly said "I think perhaps God must prefer kimchi to Japanese food." God has indeed poured out his Holy Spirit on Japan's neighbor of Korea and grown the church there in numbers and ways that Japanese believers could only dream of. "When will this kind of revival come to Japan? We have been waiting these 150 years. Lord, we are ready for it." cried another pastor in prayer.

In explaining the disparity of the way the church has grown in Korea and Japan, one pastor explained the difference to me this way: "Japanese care too much about what other people think. Koreans don't." I've seen this truth borne out in our church planting work. Time and again what others think makes a powerful difference in whether a curious Japanese will enter a church, or make a decision for Christ. And if they are able to overcome this and make a decision, what others think plays a role in whether they choose to be baptized. And after baptism, what others think affects how they grow in their faith. But I digress...

I was encouraged that the Japanese pastors and speakers at the event also unanimously expressed faith that God was and is carefully preparing a powerful foundation upon which he will build a great revival. "He has not discarded us!" singer and songwriter Chu Kosaka said. "He is SURELY at work in our hearts." The church in Japan received a great call and challenge for the next 50 years ahead. Let's expect that revival!